Glass Etching on windows first became popular in the 19th century. The wealth of the British Empire lead to the desire to decorate buildings, including their windows.

Following the abolition of glass and window tax and advanced manufacturing techniques in the mid 1800s windows in commercial and public buildings became more commonplace. The windows increased in size eventually leading to a new desire to decorate the glass, particularly in establishments where increased visibility was not desirable such as public houses. Elaborate designs began to adorn windows of public houses and whilst preserving the privacy of patrons they allowed light into the room.

Obviously over the years techniques have improved and nowadays numerous methods are used to etch patterns or images onto glass and mirrors, some of which are listed below.

Chemical glass etching is where chemicals are applied to the glass resulting in it turning from transparent to opaque. The result will depend on which chemicals are used and the length of time it is applied for. Hydrofluoric acid is one of the chemicals used in acid etching, however, this is a particularly dangerous acid to use and there are other substances which can be employed to give the same effect.

The glass can then be brilliant cut to create patterns or images. Glass that has been acid etched, or frosted, results in creating more privacy than plain glass. It can also give a greater feeling of light due to the way faceted glass captures and reflects light creating a sparkling effect. 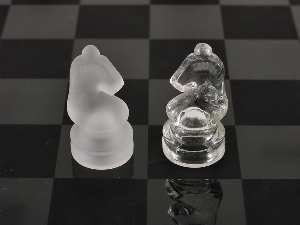 This is another method used to create a frosted effect on etched glass. It can then be brilliant cut creating patterns or images.

A sandblasting pen is available to buy online which is just like using a pen. It can be used on almost any hard surface including glass. This can be used for personalising gifts, plaques and awards.